OUR BRAMPTON OPTOMETRIC TEAM & THE STAFF AT Thompson Family Optometry

Our exceptional eye care staff in Brampton, Ontario look forward to helping you and your family with all your eye care needs. We will help you select the most appropriate frames or contact lenses and will meticulously fit your new glasses to meet your needs. At Thompson Family Optometry, we are dedicated to optimizing your vision care.

SCHEDULE AN APPOINTMENT
Home » Our Staff 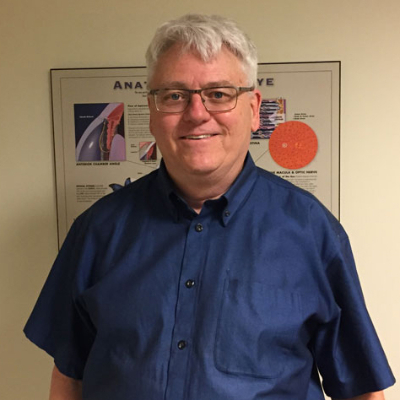 Dr. Rick Thompson spent his early years in south Etobicoke and came to the Bramalea (now Brampton) at the age of 7 years of age. There he attended different area schools including Aloma PS, Balmoral Middle School, Bramalea SS and then attended University of Waterloo where he graduated in optometry with the class of 1979. Extra curricular activities included scouting and delivering the Toronto Telegram. Summer jobs were quite varied including driving a truck for BramaGreen Farms, American Motors, and working at what is now Pearson Airport (Fleet Security, Tilden Rent-a-Car, and Canada Customs). He practices general optometry with a special interest in patients who have developmental issues including attention deficit disorder, learning difficulties, blindness and the visually impaired. He also has special interest in those who require optometric rehabilitation including those who have had closed head injuries, neurological disorders, macular degeneration, diabetic related vision changes, glaucoma, and toxic conditions. Professional courses and affiliations:

Dr. Rick Thompson lives in the Bramalea area of Brampton with his wife Trish. The family is involved in various activities at North Bramalea United Church. We are blessed to have so many friends at NBUC. One particular subject that is near and dear to our hearts is albinism. One of Rick and Trish's four children has oculo-cutaneous albinism which has a profound affect on her vision. Dr. Rick Thompson, as a consequence has become active in the National Organization for Albinism and Hypopigmentation. In the fall of 2000 he was elected to the board of directors of NOAH and served to 2010. He currently chairs the board of scientific advisors for NOAH. He has become quite knowledgeable about albinism through his contacts in this area. If you have any questions about albinism, please feel free to ask. Hobbies he enjoys include maps of all kinds, genealogy and vintage cars, especially classic British Cars. Ask him about his 1957 Sunbeam Rapier. 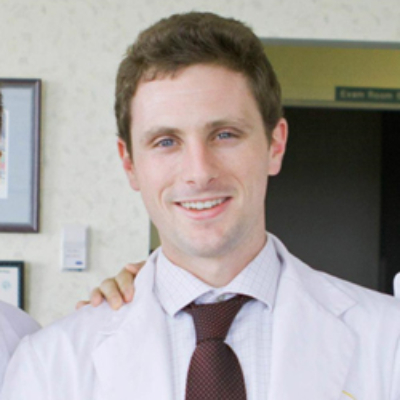 Dr. Greg Thompson has been practicing optometry in Brampton since his graduation in 2013. He was born and raised in Brampton and is thrilled to be serving the community. Throughout high school and university Dr. Greg had many interesting jobs from delivering the Brampton Guardian, working at Little Caesar's Pizza (yes holding the sign), Canadian Tire Warehouse and with the City of Brampton

He attended Brampton Christian School and later North Park Secondary School. He then attended the University of Waterloo when he earned his Bachelor of Science degree and later his Doctor of Optometry.

During his training, Dr. Greg Thompson received instruction in the latest in eye health and eye disease, refractive conditions, and children's vision. During his training, he interned at several outstanding optometric and ophthalmologic clinics including the Omni Eye Specialty Clinic in Baltimore, Maryland. He also won the Alcon Award at the University of Waterloo for authoring a paper on the treatment of a binocular vision disorder with multifocal contact lenses.

Meet Our Team in Brampton, Ontario

Ramnik joined our team in 2022, bringing with her years experience in the eye care industry.  She graduated from Seneca College in the Opticianry program in 2016.  Ramick is able to work with others and is good at problem solving. Duties are primarily related in eyewear selection, ordering and fabrication of eyewear but also include pre-testing and visual field measurement.  She has worn glasses and subsequently had LASIK eye surgery to correct for myopia in 2017. She is fluent in both English and Punjabi. Ask her about acrylic paintings and artwork.

Ashbir joined our team in 2022, bringing with her 4½ years experience in the eye care industry.  She graduated from Seneca College in the Opticianry program and subsequently became a licensed optician.  Ashbir is able to work with others and is good at problem solving. Duties are primarily related in eyewear selection, ordering and fabrication of eyewear but also include pre-testing and visual field measurement.  She has worn glasses since elementary school, and is fluent in both English and Punjabi.

Albert is a Vision Therapist with a degree from the University of Waterloo (Honours Bachelor of Science in Kinesiology). He has worked in a variety of settings encompassing sports medicine, neurorehabilitation, and early childhood development. His previous posts include teaching at the School of Anatomy in Waterloo, and research assistant at the University of Waterloo, and as a registered Kinesiologist in Ontario.

Albert is particularly interested in neurorehabilitation and motor learning which led him to his current post as a Vision Therapist at Thompson Family Optometry.

Criss joined the team in May of 2017. She has been working in the eye care industry since 2011 and brings with her a wealth of experience. Criss graduated from the School of Make-Up Art and worked as an cosmetics education specialist for seven years. Criss is originally from Vaughan and still lives there. She likes yoga and has a Yorkie named Harley.

Cathy joined our Team in 2015, bringing with her 17 years of experience in the medical device industry.

Cathy is married with two grown sons. She loves spending time at her cottage in the Haliburton Highlands, socialising with family and friends.

Trish graduated from Sheridan’s Medical Assistant's Program in 1978. At that time she began work in a chiropractor's office worked and then switched to a family physician's office where she was promoted to office manager. Later she became an education assistant at Brampton Christian Schools. Trish taught skating many years in Brampton. Trish has been involved in the practice starting as a bookkeeper in the practice in 1990. In 2011 she trained as a vision therapist with courses under the direction of the Optometric Extension Program.

The team at Thompson Family Optometry aims to provide the best possible solution for the patient's eye health and vision needs. By utilizing the latest technologies and evidence-based treatments, we can ensure that each patient maintains optimal eye health.

We welcome new patients and accept most major forms of insurance....